Thomas Rice an author for the Emergency Medical Journal caused quite a stir by a paper he published last year on the increased risk of car crash fatality due to obesity.

Where his paper concluded Findings from the study suggested that obese vehicle drivers are more likely to die from traffic collision-related injuries than non-obese occupants involved in the same collision. And we all know knowledge is power he also concluded knowledge is needed to improve seat belt use as well as airbag deployment for obese people as compared to people with a smaller frame as is research to understand the potential role of obesity and accepted safety practices of car manufacturers and injury outcomes.

Mr. Rice, who coauthored the article co-authored with Motao Zhu of the Injury Control Research Center at the University of West Virginia, stated “He was quite surprised that we had quite a little media frenzy,” as they also concluded that obese drivers are almost 80 percent more likely to die in a car crash than people with more moderate Body Mass Indices (BMIs).
Even though weight and overweight issues are right up there with sex, drugs and rock n roll, as virtual topic of neurotic interest, guilt and shame alas all of the rip roar caused by the Rice article died a typical death and everything seemed to go back to normal or should I say politically correct.

Until Humanetics CEO and President Christopher O’Connor of Humanetics Innovative Solutions a Michigan-based firm that manufactures the safety test devices, announced its development of an “obese” crash test dummy.

Christopher O’Connor says his company had been considering the development of a heavyweight and altogether larger dummy for some time, but that the study by Rice and Zhu made the project a number 1 priority for his company.
O’Connor also stated “When you have data confirming that you’re 78 percent more likely to die in an accident if you’re obese, that’s a major problem,” says O’Connor. “The last strongly regulated [crash test dummy product] came out in the 1980s, when only about 15 percent of the U.S. population was obese. Now it’s more than one third, and 40 % of middle-aged baby boomers are obese. The size of the average adult driver has changed dramatically, and we have to address that change in our products.”
O’Connor went on to say, adult crash tests involved a “relatively slender” dummy weighing 169 pounds. “It represented a BMI of a little less than 25, which means it’s no longer relevant. The data [from the Rice and Zhu study] that showed people with a BMI of 35 are 51 percent more likely to die in a crash, and used that as our baseline.”

The new dummy is more representative of an obese American driver, with a 35 BMI and a weight of 273 pounds. The point being Humanetics didn’t just slap on fatty rubbery material to an existing design and call it big-boned.
“People don’t gain weight uniformly from head-to-toe,” O’Connor says. “We had to mimic the way extra weight is distributed on a human body. As it turns out, most of the gain is in the midsection.”
And that seems to be the primary reason for the increased fatality rates among the obese, says Rice. In basic terms, a big belly makes it difficult if not impossible to adjust seat belts properly. 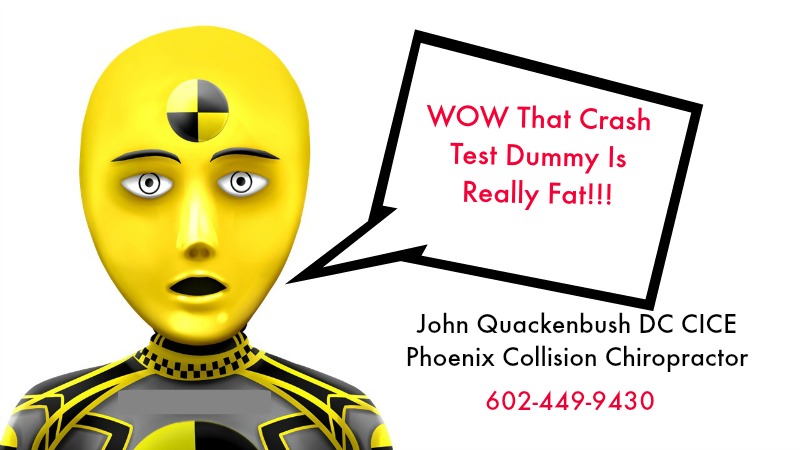 So Why Are The Larger Test Crash Dummies So Important?

Crash test dummy tech is evolving rapidly and in my opinion it can’t happen soon enough. O’Connor cites his company’s newly released advanced model: Thor. “It has many more sensors than earlier models, produces many more channels of data, and provides truly biofidelic responses. It allows you to hone in on the precise degree of injury. Not just that a certain kind of crash in a specific vehicle injures your ribs, for example, but whether it’s the second or third rib, and whether it’s a bruise or a fracture.”

Not only are we getting fatter we are getting older. So what’s next a fat elderly crash test Dummy?

Well you guessed it, because it all gets down to the fact that the United States population is getting older and fatter. And this makes us more vulnerable to injury during car accidents.
Mr O’Conner states “At the end of the day, we just want to make sure everyone is as safe as possible,” he says. “We shouldn’t think these problems are restricted to the U.S. Obesity rates in China and India are growing faster than in this country. These are safety issues that are global in scope, and we have to deal with them.”

Get A Free Consultation

I actually was involved in two separate car accidents in the last 16 months. Thank goodness that I attended with Dr Trever Penny! My attorney said that Dr Penny documented my case and he was able to get the insurance adjuster that I actually was hurt in a different area of my back. My insurance company didn't want to pay for my treatment because they said all my injuries were from the first accident. Well Dr penny and my attorney worked together and got my medical bills paid and and I am ever thankful I was able to recieve treatment for my njuries!

NO OUT OF POCKET COSTS! If your accident was caused by another person, Phoenix Car Collision Injury Clinic will bill the at-fault person’s insurance and we wait for payment! Health Care insurance is not necessary. If you have an attorney, we will work on a lien and work with your attorney and we wait for payment! All paperwork will be handled for you. Our office has over 34 years experience caring for accident victims with NO OUT OF POCKET COSTS!

Watch this video on YouTube In a recent 2013 study (Goertz et al.) the patients were

Car Collision Insurance Myths You Must Be Aware Of